Bonetail is a large, skeletal dragon that resides at the bottom of the Pit of 100 Trials in Paper Mario: The Thousand-Year Door. As his name suggests, he is a mere skeleton. In the German version of the game, Bonetail is depicted as a female, and in the Italian version, Bonetail's name is derived from "Cassandra", a girl's name. In the Japanese version, all three dragons have "baba" in their name, which means "old woman".

He is the older brother of Gloomtail and Hooktail. Unlike his still-living siblings, he is an undead dragon, having died of old age after not eating anything for centuries at the bottom of the Pit of 100 Trials. He was once a pet of the Shadow Queen that was put in the pit to guard and punish anyone of her choice. His actions outside of the Pit of 100 Trials, if there are any, are unknown.

After Mario and his teammates reach the bottom floor of the Pit of 100 Trials, Bonetail will roar, making it questionable if he can talk, as he has not ever demonstrated that ability. Bonetail's many breaths cause a variety of status ailments in addition to dealing damage. His blue breath can freeze Mario, green breath can confuse him, purple can shrink him and white can put him to sleep. All of his breaths can be avoided with Shell Shield. He can also restore his HP if it's low. Eventually, Mario defeated him and Bonetail coughed up a chest containing the Return Postage Badge.

Bonetail is the strongest enemy in the game, even stronger than the Shadow Queen. He is not necessarily harder than the Shadow Queen though, because the Shadow Queen has two hands, which can allow her to attack more than once per turn. It's also interesting to note that Bonetail has the same default attack and defense stats as Gloomtail. However, the strain of completing the previous 99 levels of the Pit of 100 Trials contributes to the difficulties faced when fighting Bonetail, as items, FP, and HP are more likely to be depleted by the time he is reached than when the player confronts the Shadow Queen. If the player is skilled enough, it is very possible to defeat Bonetail before fighting his youngest sibling, Hooktail. Despite being the strongest boss, Bonetail only offers one star point after defeat, just like the Shadow Queen. 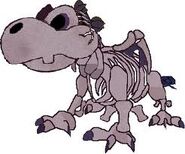